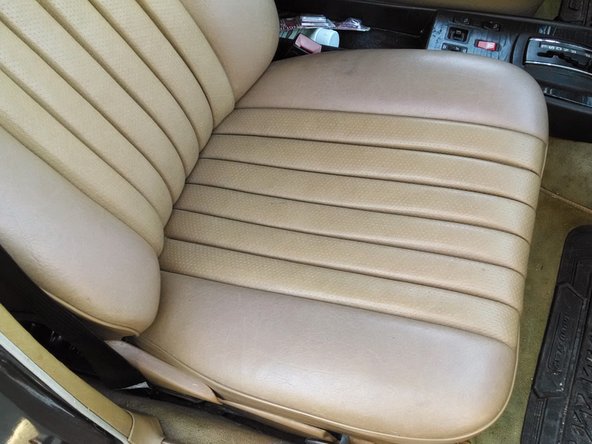 The front seats on your W123, especially the driver's side, have seen a lot of use over 30+ years and usually hundreds of thousands of miles. It's not unexpected, therefore, to find that you might have saggy foam, broken springs, stuck seat rails, broken seat handles, torn fabric, cracked leather, or torn vinyl, or a host of other issues.

While each of these can be fixed on your current seat, sometimes the easiest way to resolve the issue is to replace the seat with a good used seat you found in the online classifieds or on a parts car. This guide will show that process.

To re-install the seat, reinsert it in to the car and bolt it back down to the floor with the four 10mm bolts, and then bolt the seat rail to the transmission tunnel and replace the bolt cover there.

To re-install the seat, reinsert it in to the car and bolt it back down to the floor with the four 10mm bolts, and then bolt the seat rail to the transmission tunnel and replace the bolt cover there.

Can I just swap my driver seat for the passenger side? Passenger seat is nearly perfect. Drivers is really saggy..... Tanks

It's a bit of work, and is not covered in these guide steps. However, all it is is nuts, bolts, and screws. Take pictures as you go to help with reassembly and I bet you can do it! Good luck.

Hi I have an old mercedes benz W123 and the interior parts are worn out is it poosible to make replacements.

I would recommend finding a used W123 with less worn interior and swap out. Usually these are the cars which have not had as much exposure to the Sun.

I have pushed the seat forward with both rails and now the rails will not allow the seat to go all the way back. As I am tall, this is very frustrating. Looking at the passenger seat, the main rail should go a little further than having the rails flush. Any idea for a quick fix? Is there some secret clip not allowing it to go all the way back? I have not removed the seat, just moved it forward to look at bolts and clean back floor board.