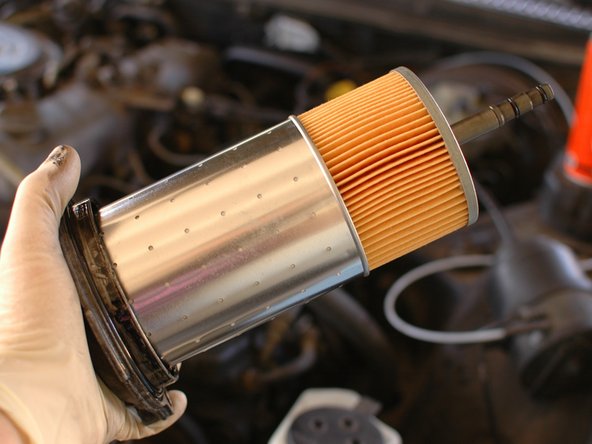 Diesel oil is specially designed to hold diesel soot in suspension within the oil to keep it from clogging oil passages, building up on cylinder walls, etc. If left in the engine for too many miles it will become full of soot and won't be able to suspend it any longer.

For this reason you'll want to change your oil pretty religiously. Some people extend their change intervals to 5,000 miles when using synthetic oil. When using conventional oil it should be changed every 3,000 miles.

Change your filter while you are at it.

As always be careful when handling automotive fluids. Diesel oil, as it is filled with diesel soot, will stain your driveway, your clothes, your skin, and anything else it touches. Wear gloves.

Be sure to also catch the fluid in the proper container and dispose of it properly. Almost every auto parts store will accept used oil and oil filters for proper disposal.

Note that this is just one of two methods. This method has you under the car, removing the drain bolt. Another method is to use a suction device to draw engine oil up and out of the dipstick. The filter change process is the same, regardless of the oil change method used.

Be sure to check for leaks after you've taken a short test drive.

Be sure to check for leaks after you've taken a short test drive.

Judging by the listed oil capacity, I'm guessing that the vehicle in the guide has an OM616. What starting / final oil capacity would you suggest for an OM617A (oil-cooled turbo)? I've been quoted 7.8qts before.

Actually, this is a OM671a. The 7.8 qt capacity is the original fill capacity when the engine is filled at the factory.

When changing the oil, you're going to be between 6 and 7 quarts for re-fill as a certain amount of oil (approx a quart) remains in the oil cooler unless you remove the lower oil cooler hose each time you change the oil, which is not generally recommended.

I prefer not to give a specific fill capacity as the better method is to first slightly underfill, then run the engine and check the level before topping off. This ensures that you do not overfill the engine. Being under-filled is less of an issue by far than overfill. Overfill can cause foaming and even a runaway diesel in extreme cases.