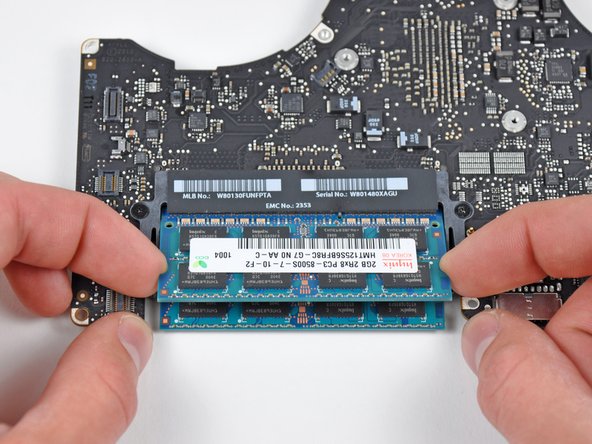 Use this guide to replace your bare logic board. This requires removal of every component attached to the logic board.

Thanks a lot for this helpful tutorial. There is precision and the detailed steps are very useful.

cpu is part of board

Hello. Why don't you remove RAM in the beginning? Thanks

Yeah, I too find this a bit weird.

This is a fantastic guide to getting the board removed! The detail around pry points, connector disengagement, and small part removals are perfect!!! Got this done in less than 20 minutes.

wow! Did just the removal take you 20 minutes, or the entire replacement (including thermal paste reapplication and everything)?

I couldn't get my MacBookPro to power on after this replacement. It made a sound like it was mounting the HD, but no chime and the screen never came on.

UPDATE- I left it on until the indicator light on the front went out (battery died), then plugged it in and it came back on and booted up. The screen and OS worked properly at once.

You may want to try resetting the SMC next time by pressing Shift + Control + Option + Power Button and holding them for 10 seconds.

I plan to replace the logic board for my early 2011 Macbook Pro using this iFixit guide. I gather, from the photo of the replacement logic board (IF161-078-1) in store, that the small heat sinks (item number: IF161-082-1 PCH heatsink; covering the Intel BD82HM65 Platform Controller Hub and the Intel L051NB32 EFL) are not included. Since it's not currently available in store, I was wondering if I could transfer these small heat sinks from the old board onto the new one by just cleaning/reapplying the thermal paste?

I don't know if you got your answer Jithin. Either way, yes you need to transfer the heatsink, microphone and speaker from the old logic board to the new one. Transferring the heat sink is one of the most important steps and please carry it out with caution. The part where you clean of the old thermal paste from the heat sink, and apply new paste to the new logic board core's, dab it and spread it out and attach the heat sink; I suggest you use silicon gloves and extra caution.

I believe the new board does not need those heat sinks. In fact, there are no mounting screws/clips to affix them to the 2012 board (I'm talking about a 15" MacBook Pro here). Please follow the link below and read through the discussion to see other people's (and my own) experiences with this replacement procedure.

My 15" MacBook Pro quad core (A1286 on back of case) logic board has gone belly up (according to the Mac store, where I took it to have it repaired only to find out this model is no longer "supported".)

Unfortunately I have no experience with the dual core board. You can find my experience under the link I've provided in reply to Jithin above. I replaced an Early 2011 Core i7 with a Mid 2012 Core i7. Perhaps this could be of help to you: http://www.everymac.com/systems/by_capab...

I have purchased a Logic board from ifixit website but it doesn't work properly and it would like to retune it and being refunded.

Any idea to whom I have to send it this request?

I need to change my logic board for mabook pro 2011 15 inch. Can I upgrade it to 2013 version or other version? Any benefit from that? How can I check the compatibility?

Extremely well done. My graphics card was completely gone and my computer wouldn’t boot. I followed these instructions and then put my logic board in the oven at 350 degrees F for 7 minutes, let it cool, applied the thermal paste to the heat sync and reassembled. Booted right up like no problem ever existed. I cannot even believe it.

One thing though, you DO NOT need to get those “Y” bits and take out the battery. Just disconnect it and the logic board comes right out no problem.

Nick, disconnecting the battery is precautionary and highly recommended. Even the slightest damage to the battery while working around it can cause a thermal event. It’s best to just get it out of the way altogether.

Perfect guide. I followed this to fix broken AMD GPU (yes, that issue). When completely disassembled and cleaned, I put the board in the oven at 200C for 7 minutes. Applied new thermal paste (the application from the factory was very bad btw), and put everything back together. And voilá! Tha machine was as good as new. Very happy with the result.

Is it still working? My MacBook quit booting up one day. It was fixed by Apple a few years ago for gpu problem but now again not working. Maybe putting it in the oven wood be worth a shot!

Thanks for this detailed instruction. I think I will have someone do it.

What is the most recent and fastest Ghz LogicBoard that fits into an A1286 Macbook Pro 15” early 2011?

To explain: I run music programs live and write my own music. This software demands a lot from my Macbook at the moment and I’d like to take it up a notch more than I allready have. Believe me its worth my cost. (without buying a new Macbook!)

Are Late 2011 15” Macbook Pro Unibody logic boards compatible to use in an Early 2011 Macbook Pro?

Very helpful - enabled me to strip down my MacBook and bake the logic board in the oven, bringing it completely back to life (twice)!

Thanks for the guide, a few differences, but relatively straight forward. I use painter’s masking tape to tape all the screws to the parts they held in, then put the logic board screws into a little metal tray. In my case the device had been previously worked on and there were 3 missing bottom case screws, only 2 logic board screws to remove along with the DC in board screws.