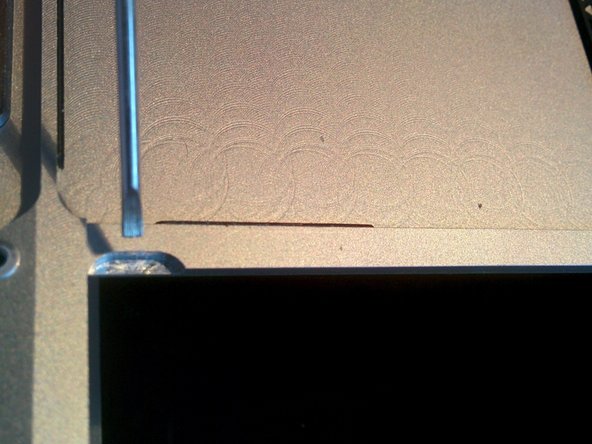 In some MacBook Air and presumably many other MacBooks the trackpad tend to become loose or rattle after a couple of years. It is a often read mistake, that this can be adjusted or "repaired" by the central adjustment screw of the trackpad (marked in step 10). This will only make it worse as the reason for the loose trackpad however can be found in the failure of two tiny buffers, that work as upper stop of the trackpad. Tiny as they are, few seem to know them and unsurprisingly they fail after countless workcycles. I did not find them as spare part but please leave a comment, in case they are avialable. I will then update this guide.

In rest position, they press the trackpad against the contact point of the mentioned adjustment screw and the click button. When you click, they decompress and when you release, they are recompressed by the bounce of the click button, which explains why their elastic force must be rather small.

Steps 1-11 base on older guides, which contain some wrong information: Do not follow step 10! The mentioned screw is only for adjustment of the clickpoint and must not be unscrewed. The trackpad already comes out after Step 8

In this working position, we act directly above the display. So better place a thick cloth or any other protective material between screen an lower case before you begin.

Hello, good tutorial. Today on my Macbook Air disarm the trackpad, since it was loose and it sounded when using it. The only solution and that was good for me, was to tighten the central screw, to the point that it remained firm and allowed the clicks.

Another thing, the brackets I found on ebay, the pair at $ 5.

Very good guide. I did this yesterday on my Macbook Air Early 2014 and it solved the problem but as @ifixitkit mentioned in Step 8, “Removing the bracket is completely unnecessary”.

Thank you for the guide. I do advise against removing the 6 Philips screws attaching the trackpad to its hinges as described in Step 8. They simply don’t have to be removed, unless you’re replacing the trackpad.

My 2013 11” Air’s trackpad had started rattling after a battery swap and the noise drove me positively nuts. The trackpad does feel as good as new now. I used a ~1mm thick double sided foam tape instead of EPDM, hoping that it’s robust enough to last.