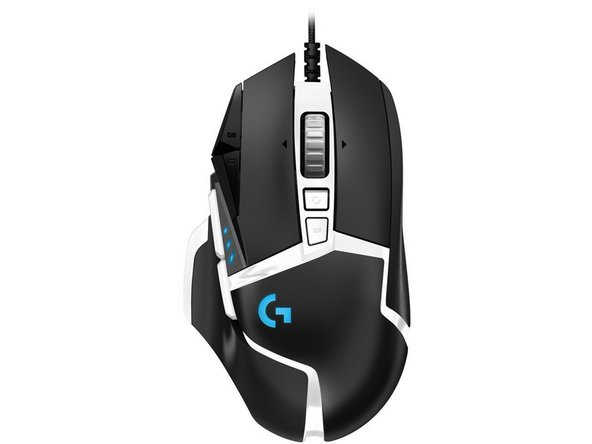 This guide will show you how to safely disassemble a Logitech G502 Hero mouse in preparation for replacing internal components of the mouse for repair or refurbishment.

Replace necessary parts and then follow these instructions in reverse order to reassemble.

Replace necessary parts and then follow these instructions in reverse order to reassemble.

What’s that button near at the spring on top. Is that a middle mouse button? (yellow button thing at the middle at the top)

You are correct, that is the middle mouse button

That’s a good switch to replace them with

Me personally, I like to pull the switches off of other mice, like those rebranded Logitech ones that are bundled with some computers

Oh shoot, you have to do soldering to replace switches? Those black boxes? Yikes, may be something I dont want to mess with if so. If I can just figure out how to clean them I will try that, but if I have to replace them with soldering, I am doomed lol

@spslizer sorry I wasn’t clearer before: the switches that are on the primary/secondary buttons are the OMRON D2FC-F-K and the primary switch has failed. I’m replacing them both with Kailh GM 8.0 switches since they seemed to have a good reputation.

I definitely need to study desoldering more though, I am having a lot of trouble removing the bad switches!!

I find that the easiest way to desolder them is to heat up the existing solder, add more new solder, then use a desolder vacuum pump as close as you can to the pin while your iron is still there. If there's still a small residual amount “tacking” it on, heat up the pad around the hole and then wiggle the switch around

It helps to have a helping hands station and a pair of tweezers or hemostats to hold the switch, as the switch and pads will get hot

Hi! I was just wondering if you knew the dimensions of the screw! I lost one when I took it apart and now my right click is a little bit wonky. Thanks!

Hi Sophie. I unfortunately cannot find the shell and screws of one of these mice.

I would recommend trying one of the shell screws from one of the bottom holes and put it in the hole under the right click or the front hole, depending on which is missing

The microswitch may also be on its way out; a “bounce” click when you click and hold is a good indication of this

Disregard the first part of my comment. I have the measurements from the shell screws

Can you plz let me know the dimensions of yellow button (middle click button)? Thanks.

If measuring from the outside where the component is indented for the contacts, it is about 8.5mm. The button looks almost like a very stubby “+” symbol. I hope this information helps!

My left mouse button stopped functioning properly and I saw a solution for anotheer mouse that said open it up, get to the button sensor (not sure the exact name, and clean off some build up, like is it oxidation? I need to look it up again. But basically, it affects the sensor so that the button wont accept to be held down. You press the button down but it acts like a normal button click.

So now I need to find the sensor and clean it, or replace it. Because the mouse is useless without a good left mouse button.

I see the housing for the sensor (i assume those black boxes under each button. I just need to safely open it up and clean inside.

You are correct, the rectagular boxes are the microswitches. It doesn't surprise me that oxidation or even just dust and skin oils could lead to these buttons not working. I've always just replaced the microswitches entirely if they fail or go on the fritz; assuming the the microswitch can be opened up, cleaned, and put it back together, then I don't see why not give it a try

It wont let me reply to you directly for some reason even though I can anybody else, but I am trying to figure out how to open the box up now.
That said, I dont mind changing it out, except I need to know how to safely remove the box. They dont have instructions on that part. Hopefully I can find a video about this online for a mouse with a similar set up.