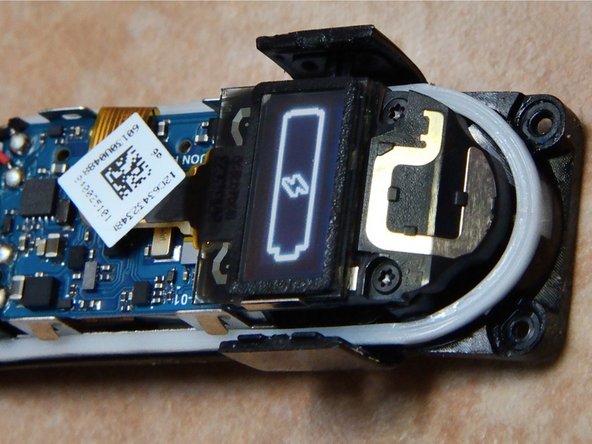 This is a simple tear down & repair tutorial for the Fitbit Charge HR. Illustrated is the replacing of a weak or dead battery.

if you have the manual dexterity and intellect to replace the battery on a Fit bit Charge HR, why can't you do it on. "Charge" plain model I have 3 of these with dead batteries?

The battery on the original Fitbit tracker is different than the newer Fitbit HR. If you can find a battery that fits, it would work.

Where can I buy a replacement battery for my charge hr? Fitbit wants me to buy a new Fitbit which is inexcusable since the watch is only 16 months old

They sell them on Amazon for $10.95. Has only one review for 2 stars. Trying to decide if I should order one. Caveat emptor!

Can you give me the size of the battery?

The batteries Amazon sells have really negative reviews.... Say they don't hold a charge for more than 1 day, some even less... I've had my FitBit for over a year and now the battery is dead and no one knows how to properly replace them. They were designed that way to get you to buy another FitBit... it's how the world works these days.

I followed this guide, and the end result was that the Fitbit powers up, but the display only shows a half-filled bar. It's not the typical battery life bar, but a slimmer one that I've never seen before, and it's always half full, even if I charge overnight. Then, if I try to connect to it with my phone, it fails to connect, and then the Fitbit shows a little exclamation mark in the middle of it.

I've tried restarting it, but the behavior is the same when it restarts. I've also tried setting it up as a replacement band through my phone's app. The phone says it sees it, tries to connect to it, then fails.

This all tells me that

1) the bluetooth is functional, at least enough that other devices can see it, if not actually connect to it.

2) the new battery is connected, because the screen and the bluetooth are getting power.

So, anybody have any idea what happened, and how I can fix it? Did I short it out when I was soldering? Did I fry the board with an ESD? Did I loosen some other connection?

Dan Slauson when researching why my fitbit was losing its charge I came across a gentleman on youtube that was explaining how to fix what sounds like what your fitbit was doing. I cant remember what he called his post but I believe he said he called fitbit customer service and explained his problem, so they talked him thru a factory reset of his fitbit charge HR, and when completing the reset his problem was solved. you can google how to do a factory reset, it doesn't seem difficult, its just a matter of plugging in your charging cable and holding down the button and releasing and repressing it in a certain sequence. I wouldn't suggest calling fitbit and telling them you replaced the battery, since they don't recommend replacing the battery, they may not cooperate in helping you. Google how to do a factory reset on a Charge HR and complete the reset and it may correct your issues. it wont hurt anything to try. Good Luck

HI,I replaced my CHARGE HR battery with a good battery from my old cracked CHARGE HR and it still won't last more then a day,the battery came out of a cracked but good CHARGE HR ,it lasted about 4 days and now I put it in this other one and it last's about a day ???? ANY IDEAS??? THANKS JOE

how do I order a battery

iFixit has recently sourced these batteries and will be making them available for sale very soon!

** FAST FIX ** If anyone needs a replacement Charge HR with good battery, let me know. I have 3 or 4 inserts with good LCD, good battery and properly functioning circuit board (bluetooth, HR monitor, etc). You simply remove the 4 screws holding your unit to the band, and replace with my working unit. Cost is $29 with free slow shipping anywhere in USA. worth dot net forward slash fitbit

Marty, I would like to get one of your Charge HR inserts, if still available. How do I get in touch with you?

What's up Marty. Can I get that too?

Where can i buy battery for fitbit hr?????

First off, this is a great article and is easy to follow.

I am trying to desolder the battery from the device but the solder doesn't seem to want to melt. I’ve turned my soldering iron up to 450c and even touched it against a reel of solder which melts instantly. I’ve even held the tip of the soldering iron on the

What temperature did you have to bring it too?

Replacement step by step is okay. My observations:

1. During opening there is necessary to wide sides -wings- eschew more widely - due to button cup. White gasket ring is there very tight so yeah there is need some power as I was scared that should break the Fibit bracelet. Next two hands with spacer plectrum is useful.

2. Be also careful of metal battery plate holder - this thing is very barely spotted to the mount and is easy to tear it off and very problematic to install back.

3. My battery was glued to the frame, so there is necessary to use more strength.

4. Be careful which battery you buy. I bought battery on and my piece was 2mm longer than original, so I must cut 2 plastic -spacers- between battery and -buzzer. But it fit et all. make wires a little longer than original ( 4mm+) for better handling. Longer wires also fit but it more complicated.

5. (my hint) Also is useful to put small slices of Capton, tape around soldered wires and in layers to over them to prevent shortcut.

Observe the side button as you remove the circuit board from the casing.