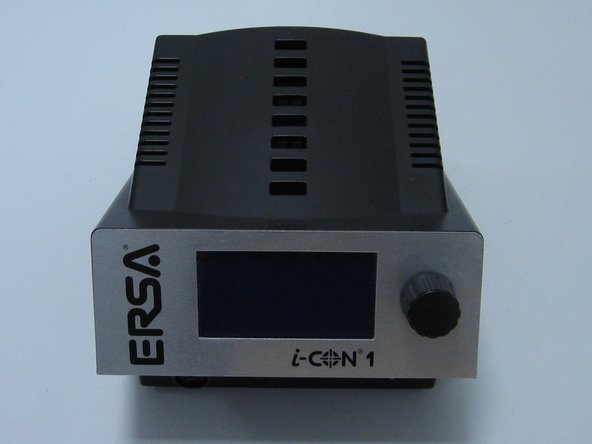 We have about 25 of these soldering stations in my workplace, but after 5 or 6 years of use, their display backlight started to fail. Without backlight, the display is almost ilegible. Since 4 stations have developed this problem so far, I've decided to look into it.

Ersa doesn't offer standalone replacement displays, they force you to buy a new control board. It costs whopping 160 EUR, which is almost half the price of a new soldering station. It is possible to buy replacement displays in this American e-shop, but shipping costs to Europe start around 100 USD. That's better, but still not exactly cost-effective (50 USD displays, 100 USD shipping). In reality, the displays are probably manufactured somewhere in China, but I couldn't identify their original manufacturer, nor I was able to find other source (Ebay, Alibaba...) for them. If someone finds them, please let me know in the comments. Here are markings that are on the back of the display:

Anyway, since I couldn't get new displays for reasonable price, I decided to replace burned backlight LEDs in the displays. I used LTW-108DCG-HS10 as replacement LEDs in this guide, but any miniature white LEDs with at least 1000 mcd luminous intensity should do. See step 14 for more information.

Thanks a ton. We have ~20 units in our facility and experiencing the same issue. I feel like writing a preventive action to ERSA. I've followed your steps, bought the LEDs and found some 120ohm (0603) resistors laying around. You are pretty accurate on the time. It's about 20mins after you get the first couple done. The results are night and day (pun intended...lol). I do like the irons and they work great, but just one drawback is the display design. Huge cost savings to do them yourself, but you need to have a light hand, and don't burn anything. I used 3 layer paper under the circuit, exacto blade and tweezers to peel the tape back. The recommended LED part number (LTW-108xxx) works great. Thanks for this awesome money saver, our employees are happy they can see the display again. You Rock!

Thank you for your detailled walktrough.

I have found two types of screen on my ersa icon1. Lucky me one of the screens had a sticker with the model identification and is equal to your screen. =)

The model is ES13BB0BMW, manufactured by EMERGING DISPLAY TECHNOLOGIES CORP.

The only place I could find it for sale was here:

But i am still waiting for a quote, because unfortunly my screen is dead.

You can also find a link to the datasheet on the above link.

I attemped connecting the other screen, the different one, and found it to no work properly on the pcb. The text gets faint. Dont know why yet.

I have just found the other display version. Is quite easy to find on the web.

On the above link you can also find the datasheets.

It also looks like someone already figured it out befor me.

However altough thee pcb is the same, there are some differences on the mounted components. A direct compatibility can not be possible.. Maybe even software is different.. I will walk through the displays datasheets and see what might be needed to ensure compatibility between the two versions.

If I can pull it out I will maybe do a walkthrough in this.

The LCD controller is the same on both LCDs .. SITRONIX7565P , meaning that software should be compatible.

The display from Orient is confirmed to work just by direct replacement. =)