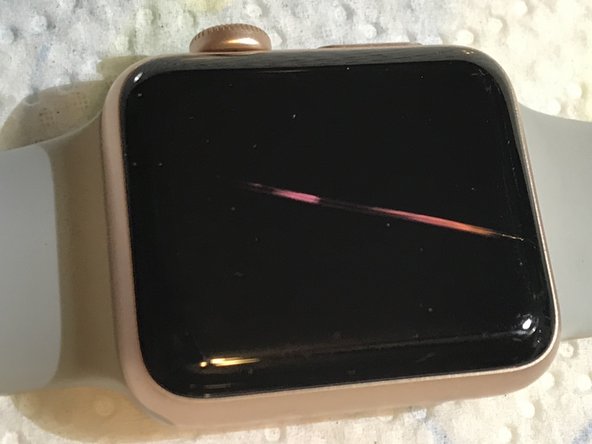 I wanted to repair a small device. I got my chance when someone asked me if I would repair their Apple Watch. After watching two videos and reviewing the ifixit Series 3 teardown, I tried it for myself and this is my experience.

Hi Guys, so I’ve opened a couple of Series 3 screens and I found out that the heat is very ineffective and almost always costs you the force touch gasket. I use a blade dipped in methylated spirit which melts the gum and allows me pry open the screen. Works every time.

Glad that you found an alternate technique that works for you. I wouldn’t call the heat ineffective and I recommend installing a new force touch gasket regardless after opening up the glued surface like this display.

Did the watch retain its swimproof capability?

I’m not sure as this repair was for a ‘friend of a friend’. I used that B-7000 import stuff. Does anyone know how to source the adhesive that Apple uses or what that stuff is?

Etechparts uses a clear adhesive and after replacing the strips below and on top of the Force Touch gasket, the watch went back together perfectly. It didn’t have the slightly raised lip that even one layer of the black stuff seems to cause. (FWIW, I always leave a couple heavy books on top of the watch overnight to help the adhesive set.)

Curious if the process is the same for the sapphire crystal. My watch fell in its face and the face popped off but it left what appears to be a rim of screen edge on the perimeter. I want to reuse the sapphire face if it is not damaged but I fear it perfectly cracked around the perimeter so a new face $$$$ would be needed?