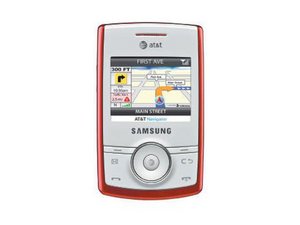 The Samsung Propel features a full QWERTY keyboard that slides out from under the phone and comes in white, blue, red, and green.

Phone Will Not Power On

Phone Will Not Power On After Getting Wet

Phone Will Not Power On

Check to make sure the phone is charged by plugging it in. If the phone does not start charging it might be due to a faulty charger. Consider purchasing a new charger.

If even while plugged in the phone is not charging the phones battery itself might be dead. This can be fixed by purchasing a replacement battery. This can be put in the phone by sliding off the back cover of the phone and pulling the old battery out

The keys on the phone are non-responsive, won’t push in, or aren’t there

If the keys are not responding then they may need to be replaced. Consider purchasing a replacement keyboard

This can be caused by a physical object being caught in between the keys, to fix this you can try tro slide a thin object around the key to dislodge the jam or by removing the key.

If your phone is missing keys you can fix this by getting replacement keys.

When the phone is on the screen is still not working

In the event that the phone is powered on and displaying only a black screen or if the screen is severely crack you will need to replace the screen entirely. To remove the screen you can unscrew the screws behind the sliding back cover to get to the screen.

Phone Will Not Power On After Getting Wet

After getting wet possible water damage prevents the phone from functioning.

When the Samsung Propel gets wet or submerged in water it can often cause water damage. This can cause many problems with the phone most commonly causing the phone not to power on. The best way to try to fix this is to take the phone battery out and leave the phone out and let the phone dry out. Do not use a blow dryer as this can hardware of phone to overheat and be damaged.

The Samsung Propel is a very classic non-smart phone that was released with a lot of different multimedia functions. It contains stereo Bluetooth technology and an MP3 player. The MP3 player is also has an expandable microSD for extra memory support. However, the 1.3-megapixel camera and camcorder are nothing special compared to other phones. The phone also has AT&T Mobile Music, Video Share for two-way video calls, and CV to stream videos among other multimedia services. The Propel is a very solid functioning phone, however it was only popular until the end of 2008.

You can check to be sure that you have the Propel by looking at the sticker under the battery and checking that it says the model number SGH-A767.