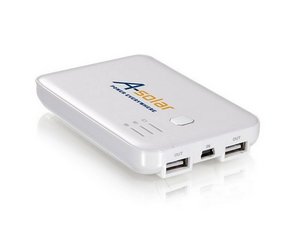 The A-Solar Power Bank AL-200 is a power bank that uses an included solar panel to charge devices.

A solar charger is a charger that uses solar energy to supply electricity to devices or batteries. Solar chargers are generally portable and can charge lead acid or Ni-Cd battery banks up to 48 Volts and hundreds of ampere-hours (up to 4000 Ah capacity). Solar charger setups generally include an intelligent charge controller. Most portable chargers can obtain energy from the sun, though many portable chargers can be plugged into wall sockets to charge themselves.

Solar power banks are generally regarded as eco-friendly mobile phone chargers that collect power from the sun and convert the power into electricity. The electricity can then be used for charging electronic devices. The A-Solar Power Bank AL-200 is a power bank that uses an included solar panel to charge devices.

The A-Solar Power Bank AL-200 is generally sold with a USB cable and a variety of adapters so that users can connect the battery to a wide range of devices. Users can also plug in their own USB cables that they typically use for charging their devices. A micro-USB cord is also included that comes from the solar panel and supplies power to the Power Bank. One of the solar chargers can be charged from the A-solar via the panel.

The A-Solar Power Bank AL-200 includes the name “A-solar” with the ‘A’ in large black font and the ‘solar’ in smaller orange font.