Everything works except the power button. The trackpad works and everykey onn the keyboard does as well.

Let’s be sure, install this gem of an app! CoconutBattery take a snapshot of the apps main window and post it here for us to see Adding images to an existing question

@danj I had to disconnect and reconnect the battery because the computer wouldn't turn on when I pluged in the charger. I downloaded the app and posted an image. Thanks!

So what could the issue be???

A common issue with older batteries is they swell up as they get old. Some really expand quite a lot! When that happens the battery presses against the bottom cover and the upper case pressing on the trackpad.

So what can happen is the bottom cover pops off or which I suspect happened here damages the trackpad and/or the trackpad cable!

This series uses the trackpad as a way station for the keyboard signals and both the keyboard and trackpad signals are then passed to the logic board via a single cable. 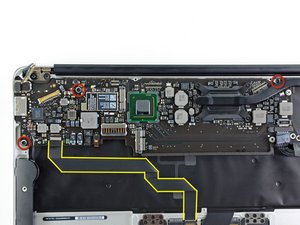 I just replaced the flex cable and everything is just as it was before. Should I go for the trackpad then?

Yes, that's the next action.

I had a similar issue on the exact same computer type - really frustrating to always have to take out the battery and put it back in to turn it on. Turns out it was the replacement keyboard I bought because the caps lock key on the original one was loose.

If it is indeed the keyboard, then don’t do what I did and purchase an extremely cheap one with a backlight that broke after installation. Doubt it’s a battery or power related issue since Apple devices usually automatically power up when you plug in the charger.