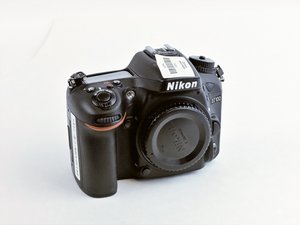 Released February 2013, identified by the D7100 badge on the front right side of the body.

My nikon d7100 back monitor get power but black screen, show nothing

my used nikon d7100 camera was boxed about 2 months. that times battery was inside. yesterday i unbox it and find that its back monitor dont work. though it get power but its black totally. i cant see menu, picture……nothing. i take some picture and see in computer that picture were captured. its top screen (on top right side) work properly. now what should i do ?

As you can take pictures OK even though you can’t “see” what you’re taking and they are alright when downloaded to a PC you most probably have a loose connection to the LCD screen or a faulty LCD screen.

With the camera turned on try shining a torch at an angle close to the LCD screen and check if you can detect an image at all.

If you cannot detect an image then it means there is a faulty LCD screen or a faulty motherboard.

In either case if it is a possible faulty LCD screen, try changing it first as this is cheaper than replacing the motherboard

Here’s a link to the ifixit Nikon D7100 LCD Screen Replacement guide which may be of some help.

Here’s a link to a supplier -example only of a replacement screen. It is only shown to give you an idea of what it looks like (note the separate small backlight power flex cable coming from the screen) and what the cost of the part is. There may be other suppliers online that suit you better. Just search for Nikon D7100 LCD replacement to get results.